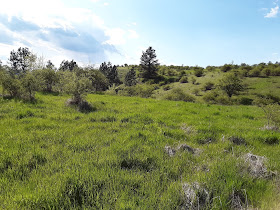 Almost everyone in the deer hunting community has heard of a food plot. A food plot when it comes to managing a property for whitetail deer generally consists of a plot of land tilled, planted with forage crops, such as clover or radish, and then maintained through irrigation, fertilizing, herbicide application and eventually reseeding.  This concept is actually pretty brilliant when you consider how productive and beneficial to the deer they can be. And they can also greatly improve your chances at a giant buck if you hunt the travel corridor to a plot. However, food plots, at least as they are conventionally maintained, have some major problems, especially when trying to design a long term sustainable wild game property.


The main problem is how much time, effort and money that goes into maintaining a food plot. It simply is a lot of work to maintain these over any amount of time. There are a ton of inputs needed to maintain a conventional food plot. You need to buy the seeds which seems reasonable, but many are brand name varieties that probably come at a much higher price than one would think for the amount of seed that you get. Then you need to purchase the equipment to till the land and plant, fertilize, irrigate and apply herbicide. This additionally costs gas with all the passes you have to do with the tractor. Some people will put more time and effort into a food plot then they will a large garden which to me seems ridiculous. Regardless, to me a conventionally done food plot seems like the wrong way to create better game habitat. But what if you could create a similar system, but with practically zero work past the establishment of the plot. What if you instead created a wild game meadow that would be self sustaining much in the same way woody browse is largely self sustaining. To me this would be a much more reasonable idea and fit perfectly into my wild game management system.


This is something I've been thinking about for awhile and I have considered doing something similar on my own property. However, this is not my area of expertise and it is going to take a good amount of research to even know a good place to start. The main issue would be to figure out the right seed mix to start the plot. You would have to find a great mix of species likely containing both annual and perennial grasses and forbs that would one, be productive, highly palatable and nutritious game forage. Two, it would have to be adapted to the climate and geography of the property to which it was being planted so that it would reproduce on its own naturally with no need to be reseeded. Three, it would have to be able to withstand the pressure of being grazed by game animals. And lastly it would have to be able to compete with the existing vegetation on the property well enough to need very little extra care. At most, maybe the occasional mowing,  brushhogging, or prescribed fire could be used to get rid of competing vegetation, especially the encroachment of woody species.


These are pretty strict conditions, but I believe that if enough research is done most properties would be able to come up with a suitable mix that would meet all these requirements. It would likely require a ton of trial and error to see what would work best in certain conditions and climates, but over time some recommendations I think could be developed.


I believe if done correctly these “food plots” would resemble a natural meadow with many different species all coexisting together.  Diversity would be very important. Especially when starting out. If a few species die out from the original planting over time then that would be ok, because ideally you would still have a good amount of different species that would still be doing well. Having a high diversity would also help give the game a more nutritious varied diet.


This is something I will continue researching as I admittedly do not really have as good of an understanding of possible forage species for wild game as I do for woody browse species. Nonetheless I think it is a very valuable idea to explore and I will likely write more on the topic later after more research has been done. So stay tuned!